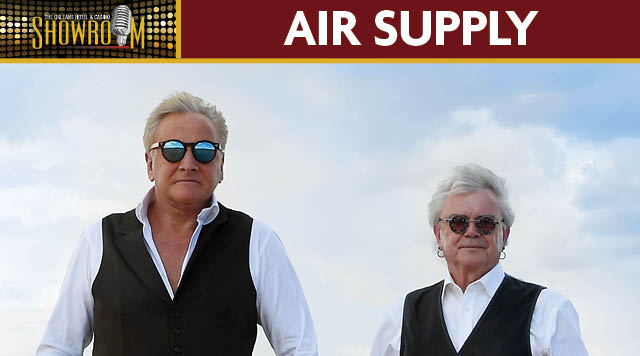 Air Supply at the Orleans Showroom

However, it is the live shows that always hold audiences captive around the world. They were the first Western group to tour China, Taiwan, and countless other countries that before would not allow pop music across their borders. In 1983 they recorded "Making Love Out Of Nothing At All" by Jim Steinman which solidified the group as a permanent force in modern music. This song was released on The Greatest Hits album which soared past 7 million copies.

"Lost in Love", "All Out of Love", "The One That You Love", "Sweet Dreams", and "Making Love Out Of Nothing At All" have each achieved multi-million plays on the radio.

In 2013, the duo was inducted into the Australian Recording Industry Association’s Hall of Fame.Air Supply celebrated their 40th anniversary in 2015 and continue to delight audiences all over the world.